Scoliosis is a complex 3-Dimensional mechanical deformity of the spine and has been called the “orthopaedic enigma” due to its ambiguous aetiology (i.e., what causes it to happen?). Various mechanisms have been shown to be involved in its process however the only real strong scientific evidence at this stage is that commonly a genetic element is involved. The 3D deformity is a combination of the twisting, tilting and translating of the vertebrae which actually create the abnormal curve. A scoliosis can only be truly diagnosed by a weight bearing x-ray where the COBB ANGLE is measured in excess of 10 degrees and there is associated rotation (twisting) of the spinal vertebrae. It is estimated that 3% of the general population is affected by scoliosis and it is vital that early detection and management of this complex disorder occurs especially during the growth phases of early and teenage life.

What are the Different Types of Scoliosis?

This is basically when the individual is born with a bony abnormality such as a malformation of one of the spine’s vertebrae, e.g. hemi-vertebrae, which creates an asymmetry of the spine which can cause the spine to buckle and form a scoliosis.

There are three types of Idiopathic Scoliosis (idiopathic means “of unknown cause”) which are each classified by the age in which the condition is actually diagnosed. It is the most common type of Scoliosis as 80% of scoliosis cases are idiopathic in origin and a scoliosis is usually assumed to be “classified as Idiopathic until the opposite is proven” (Zaina et al. 2012). However, it is important that the remaining 20% of cases are adequately assessed and managed due to the associated complications with these secondary Scoliosis.

– Infantile Onset Idiopathic Scoliosis is diagnosed between the ages of 0-3 and is more prevalent in males. It is the least common of the idiopathic scolioses and considered as one of the more difficult categories to manage due to the early stages of life and non-weight bearing capabilities of the young human frame. It is important to rule out any underlying disease processes in infantile cases and interestingly some cases, especially the lesser curves, do spontaneously resolve.

– Juvenile Onset Idiopathic Scoliosis (JIS) is diagnosed between the ages of 4-10. JIS generally has a high risk of scoliosis curve progression and approximately 70% of cases may require bracing if the curve advances beyond 25 degrees. Cases under the 25-degree threshold are monitored closely and usually exercises and spinal therapy are recommended initially.

– Adolescent Onset Idiopathic (AIS) Scoliosis is diagnosed between the ages of 10-16 and is more prevalent in females. This is the most common Scoliosis and is associated with puberty and the growth phase during teenage life.

There are two scenarios with an adult scoliosis which are:

De-Nova refers to a scoliotic curve that has been caused by “wear and tear” or degeneration of the spine. It is quickly becoming one of the most common presentations of Scoliosis.

According to Kebaish et al. (2011) the prevalence of Scoliosis increases with age, in so much that 9% of over 40-year olds and 30% of over 60-year olds respectively will develop a scoliotic spine; the primary concern in these presentations of adult cases is pain and disability.

Schwab et al. (2002) advocate that due to the altered mechanical loading conditions in adult scoliosis that there is an acceleration of the degenerative cascade which can augment conditions such as stenosis, spondylolisthesis and disc degeneration leading to a severe reduction in long term quality of life and independence.

As the name suggests these are when a scoliosis occurs due to an underlying disease process. Common causes of the secondary scoliosis include Cerebral Palsy, Muscular Dystrophy, Ehlers-Danlos, Marfan’s Syndrome, Neurofibromatosis, Syringomyelia (Arnold Chiari), Osteoporosis and Hypermobility Syndrome. Please call during our business hours, or use the form below.

To receive this offer if you call the office directly mention “Website Offer” on the phone.

Get the most comprehensive spinal and postural examination that you will ever likely have, for only £50. This will reveal detailed information on your current spinal health profile and normally costs £225

How Do We Assess A Suspected Scoliosis At Advanced Spinal Care? 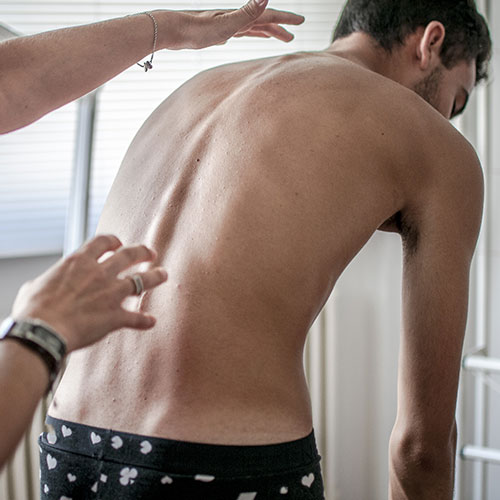 An initial consultation at Advanced Spinal Care includes a thorough history of the patient including family history, a thorough orthopaedic and neurological exam, specific Scoliosis postural and special tests including the use of a Scoliometer to ascertain any abnormal curvatures of the spine. A reading of 7 degrees or more on the Scoliometer (a type of protractor gauge) is suggestive of further investigation by x-ray. If weight bearing x-rays are indicated then we can perform these on-site with our digital x-ray equipment. If any abnormal exam and history findings suggest that an MRI is indicated then we can refer our patients to an independent source for a quick and efficient service for these in-depth images.

After reviewing all of the gathered information and data from the initial consultation we should be able to answer to the patient with a Report of Findings on whether they have a true scoliosis, the type of scoliosis, the size and location of the curve, the risk of progression of the curve and the recommended way forward in managing the condition.

According to Weinstein et al. (2013) only 0.3-0.5% of the population have progressive curves requiring treatment however the conundrum appears to be in the difficulty of determining which curves will progress? The prediction of the individual’s growth phase and the speed of growth seem to be key factors in the risk of progression and interestingly the growth phase is now considered the fourth dimension in correctional bracing treatment.

1. Refer for Further Investigation
If we become aware of a neurological, neuro-muscular or congenital involvement with the scoliosis during the assessment that could have implications on the individual’s health and we feel that the condition is beyond our scope of practice then we can refer for further neurological/ orthopaedic assessments and/or further imaging such as MRI or CT scans.

2.Observation
Curves less than 20 degrees are generally monitored over 3-6 month periods depending on the age and likely risk of progression of the patient.

3. Scientific Exercise Approach to Scoliosis (SEAS)
These specific scoliosis exercises are designed to improve the stabilisation of the spine which is achieved by the active self-correction of the scoliotic curve. They are taught to the individual in the clinic and are recommended to do each day at home (usually 20-30 minutes per day). Regular monthly check-ups are recommended to keep up the enthusiasm and frequency of the exercise program and the difficulty of the exercises are changed to aid the individual’s rehabilitative progress.

4. Chiropractic BioPhysics (CBP)
This highly validated scientifically researched technique enables us to use mirror-image spinal adjustments, exercises and traction on scoliotic patients to reduce the size of the curve. Exercise and tractions can be carried out at the clinic and at home.

Recent advances in computer aided design (CAD) and computer aided manufacture (CAM) in assessing the complex 3D nature of Scoliosis have become another tool in the management and assessment of Scoliosis. Various studies such as Corbetto et al. (2017) and Desbiens-Blais et al. (2012) have indicated a more efficient evaluation of the three planes of deformity and hence the design of a more effective brace. This ability to create a specific geometrical model of each patient allows the construction of a bespoke bracing model which can modify the asymmetrical spinal column pressures caused by Scoliosis. At Advanced Spinal Care, our practitioners are Authorised Scolibrace Providers and can prescribe bracing protocols for our Scoliosis patients. Scolibrace combines 3D full-body laser scanning technology, x-rays and postural photographs to manufacture a custom designed brace for the individual using CAD and CAM technology. A Scolibrace is an over-corrective brace which guides the body and spine into a posture that is the opposite (mirror-image) of how the individual’s scoliosis is shaped. It is scientifically effective, lightweight and easily concealed under clothing which proves to be aesthetically congruent to the patient.

6. Surgery
When a scoliotic curve reaches 45-50 degrees, surgery may be indicated. The research shows that curves in excess of 50 degrees have the propensity to increase by 1 degree each year. At Advanced Spinal Care, we try to avoid the surgical option and manage each case as conservatively as possible as surgery does not always guarantee a satisfactory outcome.

Our practitioners have over 45 years of combined clinical experience in spinal disorders and have extensive experience in treating Scoliosis all around the world including the UK, Portugal, India and Nicaragua. They have had extensive training in the USA (Chiropractic Biophysics), Australia (ScoliCare) and Italy (ISICO) with regards to the conservative management of Scoliosis and other spinal disorders. They are both approved Scolibrace providers.

The clinic follows Evidence-Based Clinical Practice (EBP) approach which can be defined as “the integration of the best research evidence with clinical expertise and patient values” and also follows the 2011 guidelines as laid down by The International Scientific Society on Scoliosis Orthopaedic and Rehabilitation Treatment (SOSORT). Utlising the Spinal Analysis Machine (SAM) we are able to asses your postural imbalances to help our patients in developing a treatment plan. Our team of chiropractors are experts in CBP to help our patients improve their spinal health and function.

We are experts in managing scoliosis treatment and are proud to offer multiple treatment options for our patients. At Advanced Spinal Care at The Thames Clinic in Staines, UK, we have treated thousands of patients suffering from a wide range of health issues and conditions. We may be able to help you too.